Sometimes I still can’t believe that I am finally a mummy after so many years of stress and pain. There were many times I thought that I was at the limit of what I could take but I kept going, somehow, and looking down at my beautiful little girl sleeping soundly I am filled with so much love. That love is tinged with the sadness of knowing she is not really an only child to me. Twice before I had a little life inside me only for it to come to nothing. Losing a baby changes everything, it is always in the back of your mind – how old they would be now, what would they be like, if I tried for another would it work out. It makes you more cynical and wary however hard you try to remain positive.

Like everyone starting out on their baby making journey I had never suspected that I would have any issues. We decided to start trying in 2013 after a year of marriage during a USA road trip. It seemed the perfect time and we kept joking about places we stopped at as names for the baby we were sure would be on the way when we returned home.
But nothing happened. We kept going but after almost a year we thought we should get things checked out and after a few tests was booked in for an appointment with the fertility clinic at our local hospital.

At an unrelated appointment my doctor prescribing me antibiotics asked if I could be pregnant, I said no but thought I should take a test, just in case. Two lines showed up, it was really happening!!! As you do when you have no experience of loss your mind gets carried away, we were planning our whole future out with this little life that was on the way. Then at 6 weeks I had a little bleed. I was referred for a scan, just in case. We got a picture of our little pumpkin, were told there was a good strong heartbeat, we were sure everything was going to be ok. Except it wasn’t. I started to have a bit more bleeding, just a tiny bit every now and again. I don’t know how but I just knew in the pit of my stomach that it was all going wrong. I kept repeating to myself the mantra ‘we have a good strong heartbeat’ to try to convince myself everything was going to be ok.

We had been celebrating my brother in laws birthday with a curry when I got a really bad stomach ache. I blamed the curry of course but when we got home I went to the bathroom and I instantly knew something was very wrong. I don’t really remember much about that night except staring at my shoes and the IV in my hand but we came home with the news that we were just two again. We just lay on our bed, sobbing and looking at our little scan picture in disbelief. I felt so ashamed, we hadn’t told many people, just our parents and siblings but letting them know was almost impossible, I just couldn’t get the words out.

Time passed, we threw ourselves into trying again with everything we had. Our time was filled with tests both at home and at the hospital. We controlled everything we could, focused everything on getting pregnant again. But nothing happened. Two years passed. The final verdict was unexplained infertility. We were not eligible for NHS treatment, we had to either have another two losses or at least three years of trying without success.
We started to look into our options, visited a few clinics with a view to starting treatment in early 2017. Then out of nowhere I discovered I was pregnant again. I was terrified but everything seemed to be going well, no bleeding and the smell of tea turned my stomach. We were really cautious, had silly little rules we followed (curry was a big no-no, even though we knew it hadn’t caused anything to go wrong). Our scan date was scheduled in between Christmas and New Year. What perfect timing, we thought, after all of our struggles we could start the new year off with some fabulous news. I felt so anxious waiting to go into the appointment and then the blow of having our dreams dashed again. New Year spent huddled under a blanket in tears.

We went back to the doctors to see if anything had changed with our eligibility for treatment but they kept telling us that we had been successful before and we just had to keep trying. I wanted to scream at them I was so angry, if we had been successful we would be parents. We were back to square one. We couldn’t wait for three more years or face another loss and with all of the cuts in treatment would we even get anything anyway if we waited. We found a lovely clinic, Bourn Hall, and after a consultation we decided to go for it. It all moved so fast, by April we were starting our first IVF cycle. I was so sure it would not work first time I had a ticket for Glastonbury. But it did work and I feel so lucky every day to have my dreams come true.

Loss takes so much away from you, I was so scared of something going wrong, was convinced it would go wrong, it took a long time for me to enjoy my pregnancy. I never felt I could post things on social media like a cute announcement, as I knew how much something like that had hurt me. We had alienated so many people by avoiding friends and family with small children, why would any of them want to celebrate my pregnancy? Who would want to attend a baby shower for someone who had avoided them like the plague? If we could take away the shame and secrecy of baby loss these actions could be understood. People struggling with infertility and baby loss wouldn’t feel so alone as in reality you are actually very far from being alone. 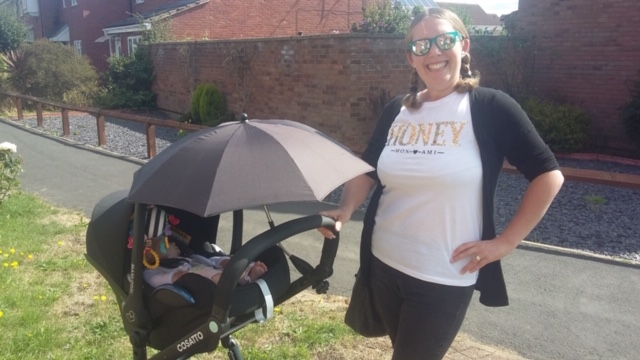