I knew there was absolutely no chance that Kate would wait the recommended 2 weeks after the embryo transfer to take a pregnancy test. After the years of procedures and testing I knew just how well she knew her body and what every twitch and ache meant. Although confident the IVF would be successful, I was still completely shocked when I took a call from her at work to tell me she’d had a positive test result. It was much a relief as anything, that for now we were free of the pain and the burden of the last couple of years of fertility treatment we’d been through. I didn’t even consider the thought that the pregnancy would be anything but smooth, and in about 9 months time our family would be 50% bigger.

Fast forward about 21 months, we’d had almost a year to get used to life with our beautiful son Austin. I took a call from Kate at work, with the same news as before that she’d had a positive pregnancy test. Because we’d been told so many times in the past that natural conception was unlikely to happen for us this was actually more exciting news than the first time. My mind started racing, thinking ahead to the prospect of having two children under the age of 2 in the not too distant future.

This pregnancy certainly didn’t have the same feel of the first one and I still can’t put my finger on why. Like I’ve said I trust how well Kate knows her own body and her cycles and the anxiety levels really felt there from the start. I don’t like to self diagnose over the internet for anything and made no exception for the pregnancy. Kate booked us in for an early scan and I was keen to get this done to get the stress levels down. It wasn’t just the ultimate result of this scan that was disappointing but it was also the feeling I got from the sonographer which was my first experience of a medical professional giving us false hope. I think it was fairly clear from the her body language that she knew it was bad news but she didn’t seem prepared to confirm it to us. The cynical part of me thought she was thinking about the opportunity to get more money from charging for a private scan in another 2 weeks time. I imagine it was just me being upset about the likely outcome that caused my cynicism but I’d much rather see people who will talk straight to me.

Kate did however seem to come out of the scan with some positive thoughts over the pregnancy so we decided it was business as usual, Kate would take it easy and we would see how things progressed. Unfortunately as it turned out things didn’t progress well and after a few days of Kate bleeding heavily we had an appointment in the EPU. If I wanted straight talking this is where we got it, we had “no evidence of a viable pregnancy” it felt to me like the saddest place on earth and I was trying to judge the proportion of bad to good news that was given. I reckon 75% of the news patient’s hear in that hospital department is not the news they want to hear. It certainly wasn’t for us.

On our way home I remember thinking amongst the disappointment I was feeling how on earth do the staff in that ward cope? For me it was simply a soul-destroying place and we were in there for only a brief time, not working shift after shift handing out bad news. The nurses in there have a really tough job but they do it with bucket loads of compassion and dignity. We got home that day to find that in our absence and whilst we were getting the confirmation of our bad news, Austin was at home and he’d learned to high 5. It really felt like a silver lining moment.

That first miscarriage came from an unexpected pregnancy, once we’d picked ourselves up following the disappointment we got back on track with our original plan of transferring one of our frozen embryo’s. Having had 1 successful and 1 unsuccessful pregnancy I really didn’t know how to feel about the likelihood of success for this attempt and for a very scientific process I felt incredibly emotional during the actual transfer process. I guess I was just incredibly grateful for these professionals that have dedicated their careers to helping out couples like us. As I’ve said previously Kate knows her body pretty well by now and she knew within days that the transfer had been successful. Then everything seemed to go downhill quite quickly, the process of events is a bit of a blur but the outcome was more disappointment and sadness that the embryo transfer had ultimately been unsuccessful.

For me the sadness I feel in myself has diminished over time, every so often when doing something innocuous I’ll pause and think about how differently things could be right now, but in general I have coped with the losses and disappointments. My sadness on Austins behalf lingers. As he grows and develops I know he would flourish with a sibling and would be a wonderful big brother. One day we’ll explain to him our family story and just how hard we tried to get him a little brother or sister and how many knocks we took along the way. The one thing I really wish I could do is take away some of Kate’s pain. I know she feels a great deal of guilt over the 2 previous failed pregnancies and that equates to her putting more pressure on herself as we head into the next stage of our treatment. Life really is full of ups and downs, fingers crossed we have another up just around the corner. 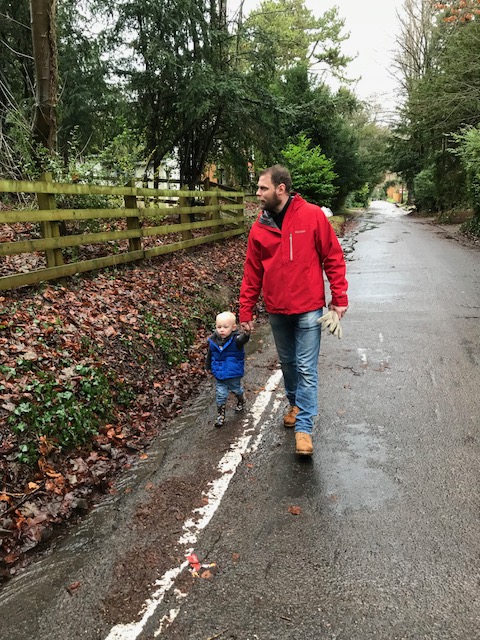